Home » How Parking Lot Sweeping Has Changed Over Time

How Parking Lot Sweeping Has Changed Over Time

The history of our company and the industry are intricately entwined. Today, we want to explore how far we’ve come and explain some of the technological changes that make parking lot sweeping much simpler for you, our valued customers.

The Founding of the Commercial Sweeping Industry Leonard J. Vella is known as the grandfather of the sweeping industry. But, back in 1958, he was just a new high school graduate with enthusiasm and work ethic. He started his own company called San Jose Commercial Services to help local businesses clean up. He spent long nights cleaning parking lots and days convincing business owners that having an outside cleaner would free up their staff to do other work for the business, work that is harder to contract out. He was a convincing salesman and a thorough cleaner, so his business soon found success.

Vella found so much success that he was having trouble keeping up. He brought on a partner, but it wasn’t enough. Especially on nights where there were high winds or rain, Vella couldn’t clean as many parking lots as he wanted to. The ride-on sweepers he was using also had difficulty picking up larger trash. Going over his work with a broom was inefficient. He quickly realized he needed to provide a faster and better clean for his clients and the solution was a better cleaner.

His daughter, Gina Vella, put it this way, “Once he refined the business and realized there was a market, but there wasn’t an efficient sweeper to do the job other than a ride-on where he was exposed to the elements, he set out to develop a sweeper.”

The Development of MASCO Sweepers 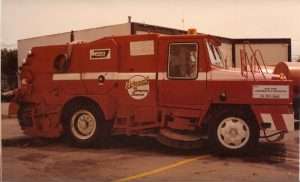 Sweeper trucks did exist when Vella started, but they were limited in size, power, and function. They looked more like go-carts than the professional and full-sized truck versions you see today. Some companies were already experimenting with new sweeping technologies for roads, but Vella, who felt he knew the parking lot industry best, wanted to come up with his own solution.

Inspiration often comes from unlikely places and connections. In his spare time, Vella was a boat racer. In 1975 he met Larry Dyck, who was building boat trailers for flat-bottomed speed boats. Vella and Dyck became friends over water skiing competitions and over their mutual love of the water. Together they set their minds to creating a better sweeper.

Vella explained his main problems to Dyck. As it stood, he was placing his sweepers into trailers, connecting them to a truck, and driving to his client’s parking lot. There he had to unload the sweeper and then drive along (at its slow speed) to clean the lot. Wouldn’t it be much more efficient if the actual truck was the sweeper? That way he would be protected from the rain too. And, was there a way to pick up larger debris with this larger sweeper?

Dyck was mechanically savvy and refined Vella’s ideas. He chose a Ford Courier, the smallest pickup made in the 70s, as the foundation for the sweeper. Together, the two developed a better, larger sweeper and mounted it directly to the truck. Soon, they put the first model to work. It did such a good job that Vella bought nine more from Dyck. While only in their early stages, one day, these sweepers would become MASCO sweepers. 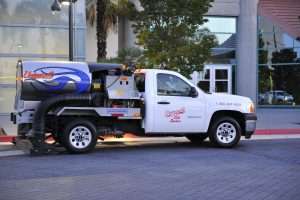 You can imagine the curiosity that the first truck-mounted sweeper would have caused. Even though he was mainly cleaning parking lots at night, Vella got a lot of attention for these unique and efficient cleaners. His friends in the industry were soon inquiring about buying their own. Other entrepreneurs started looking into the sweeping industry as a good opportunity for their own businesses.

Dyck and Vella sold more of the machines and incorporated a business called Mr. Air to do so. They hired a salesperson, Jim Miles, and many others to support the business. Vella turned back to focusing on his sweeping business and the service he provided to his customers. The industry as a whole continued to grow.

A major turning point came in the late 1980s when News Sweep was founded. This was the first newspaper for the commercial sweeping industry. In 1987 came the second publication, called SuperVac Quarterly. With connections and news about the industry growing, the first-ever power sweeping organization was founded. The founder was the salesperson that Vella and Dyck had hired, Jim Miles. It was called the National Contract Sweepers Institute, and it ended up serving 145 sweeping companies.

For many more decades, Vella focused on expanding his business. He found customers well outside of San Jose and began adding new services that customers needed to have a perfectly maintained property and parking lot. 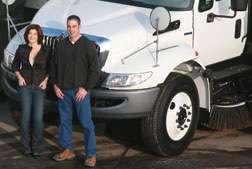 In 2005, Vella retired. Dyck bought Vella out of Mr. Air, and Vella’s children, Gina Vella and Joe Vella took over the parking lot sweeping business. Joe had worked at the business alongside his father since he was 16, the same age Vella was when he originally founded the company. With so much experience Joe made the transition smooth. It was made smoother still by Gina, who had sharpened her management and leadership skills in the fashion industry. It was just the right combination of insider knowledge and experience with new ideas and strategies.

At this point, we were much more than the simple sweeping company that had started in 1958. In 2011, we adopted the name Universal Site Services to reflect all we do.  After all, even newer technology has come along that allows us to provide our customers with a larger suite of services and take more of the essential (but time-consuming) property maintenance tasks off their plate.

We’ve added a team of experienced landscapers so we can handle all of our client’s exterior property. New pressure washing equipment has allowed us to give parking lot asphalt a deeper clean. Plus, we’ve designed comprehensive day porter packages that let our clients truly relax knowing that their property is clean even when there’s high traffic on it.

Our scope and our vision have grown, but we are still leading Universal Site Services with the values that our father committed to: loyalty, dedication, teamwork, and respect for the “feet on the street” that continue to make us successful.

We’re excited about what the next chapter of our business will bring, and we hope you enjoy taking that journey with us.

Get A Quote Today